Where Pen and Image Speak!

As October turns its page and the November winds bring the expected chill to all, a greater bitterness is ignored and hid from view.

In the annals of human bestiality and destructive power, the symbol of the poppy is produced to recognize the eleventh hour of the eleventh day of the eleventh month. An Armistice to millions slaughtered in the name of power and aggregation of wealth. Of course the word to those ignorant as to war’s true purpose, it personifies that great sacrifice made for Freedom and Democracy.

How hollow these lies are seen for what they are from the distance of years. Yet still it does not affect the blindness of so many who cannot see the travesty continued and played upon lost souls, ignorant of present commitment to slaughter, destruction and the hawkers of greater lies.

Evil is resident within the very core of our lives yet the distractions offered like candy have a raw, repellent  and invidious means of hiding these truths. Addiction to such candy is such a pernicious pestilence as to make the Pharaohs of ancient Egypt seem like rank amateurs conjuring up  their own karmic returns.

We fondle our palm and handhelds, we chatter on our Galaxies and i-Phones yet the real information, the true news seems to skid around us as if it was some ephemeral irritating mosquito. Best swat it as its inconvenience brings realizations we prefer not encounter.

Denial in the face of a witch burning at the stake, a Christian thrown to the lions or children slaughtered without attention by the bombs and actions of the very leaders we allow, through passive acceptance, to  ‘fight for us’ add up to the same thing. An utter disregard for humanity. A disdain for truth and a roll over surrender to lies and manipulation.

On the 11th November the world is told to recognize heroes long dead, gallantry hard pressed. Yet these needless actions of the unwitting or cajoled are merely illustrations of very lambs to slaughter to feed an appetite of psychotic power. To glorify the very slaughter about to be rained down on us again for a third time under the pretense of fighting evil and terror, must be the very descriptor of lunacy.

Yet screaming from the surrounded towers of truth is a voice declaring these same terrorists ruling us are using their proxy prostitutes of psychopathy to deal the true injustices that war always has been. Poppies show the color of blood yet refuse to speak out the excrement ordering that blood spilled.

I am surrounded by those appeasing such evil, in the pursuit of inexcusable ignorance or even worse, refusal to accept hard truths for the comfort of easy lies. Such sorrowful humans exist in the depth of our families, strut their pernicious righteousness as alleged friends and acquaintances, pompously presuppose all people will blindly accept such end of days iniquities as plausible and right.

The presstitutes, the television terrorist journalistic employees using the Mainstream to perpetrate such horrors demand the wearing of such poppies as marks of subservience, compliance and corrupted allegiance.

There can be no greater sick sycophancy than this annual abeyance of reality. Yet in truth when is it ever out of abeyance these days?

Does it take another dose of humanity’s lunacy to waken realization of what we have spent centuries denying? If it does it could be the final Yaroo  of a human race, like some lemming awakening as it falls to its death, recognizing it has become its own worst enemy and final executioner.

In the space that is eternity, this nano etch might come to be seen as an irritating interlude of little importance.

A minute’s silence anyone, or should we pause longer for illumination to spark?

Arms trade workers, here’s an early warning
You might wake up tomorrow morning
And find that this is the glorious day
When all your jobs will just melt away
Because the people of the world are going to make sure
There’ll be no more, no more, no more war
So now’s the time to switch your occupation
From dealing in death and desolation
Don’t hang around now you’ve been told
The international murder trade’s about to fold
You won’t have to maim, you won’t have to kill,
You can use your brain and use your skill.
Peace needs workers of all kinds-
Make artificial limbs instead of landmines.
Tricycles instead of tridents,
Violins instead of violence,
Lifeboats, hospitals, medicine, drains,
Food and toys and buses and trains-
Come on, there’s plenty of work to be done
If we’re going to make peace for everyone. 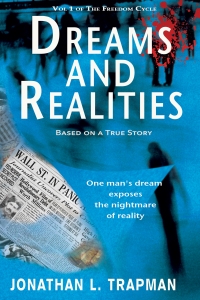 Jonathan L Trapman is an author, creative writer and photojournalist who has spent the better part of his 50 odd years in public life, learning from his personal experiences, sharing them, listening to others, whose lives have allowed him to open his own mind to a beauty, even within horror, that is transforming and empowering. His written work endeavors to convey, through true tales and fiction, impressions thus garnered. Dreams and Realities his latest work was published September 2016

politics for the people

Words of Wonder, Worry and Whimsy